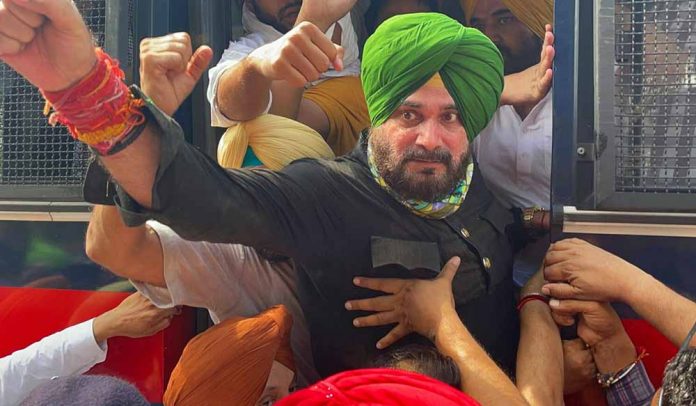 Punjab Congress chief Navjot Singh Sidhu and other party leaders were detained at Saharanpur on the Haryana-UP border where they are staging a dharna on Thursday.

He has demanded the arrest of Union Minister Ajay Kumar Mishra’s son in connection with the death of farmers during violence in Uttar Pradesh, saying he would go on hunger strike if action is not taken against him by Friday.

Chief Minister Charanjit Singh Channi also joined Sidhu for a brief period when the march was about to start.

Instead of holding  the party flags, Sidhu and other leaders could be seen holding the flags associated with farmers agitation as slogans of ‘Kisan-mazdoor ekta zindabad’ were raised.

Earlier in the day, farmer unions surrounded the cavalcade and then the vehicle in which Sidhu was on his way to Mohali at Dhareri Jattan toll barrier and showed him black flags. It was after much requests by Sidhu that the farmers allowed him to pass through.

Sidhu had resigned from the post of Punjab Congress chief on September 28 but it wasn’t immediately clear if the resignation was withdrawn.

Before the protest march Thursday, Sidhu slammed the BJP-led government in UP over the Lakhimpur Kheri incident.